Eddie Gutierrez won this years A league sportsmanship award by a long shot. Eddie messaged me a couple weeks prior to the season to ask if he could add a team in last minute, due to not knowing if there was still time to get a team or past the deadline.

In most circumstances, it would have been too late for the team to join but due to a withdrawn sponsorship/ team error,but extra shirts were available that mostly accommodated the teams specific needs (teams don't typically have players with 2XL or 3XL size jerseys).

Eddie was sure that his team had a chance to win this years summer league championship as the team was mainly formed in efforts of dethroning (Now 4x) reigning champions, slime green (Integrated Chiropractic). The team obtained a sponsorship from Taggart Electric Inc.. Taggart Electrics roster consisted of this years Big man Scott Taggart, two of Eddie's sons (Jordan & Alex) and a former Blendos All-Star Gerry Joy to name a few.

Although Eddie did not attempt may shots on the year, he was a catalyst for his team that prided itself on defense, and teamwork. Taggart Electric finished the season in 3rd place following a loss to Slime Green (Integrated Chiropractic) in the playoff semi finals 72-45.

Eddie player/coached Taggart Electric through some stressful times including a tough loss at the buzzer vs Five Star Subaru by Dan Devantier but he was also the first to congratulate the team, when the video of said shot was posted to Facebook.

Taggart Electric continued to have issues with players being sidelined due to injuries and conflicting schedules. Eddie also took initiative to help opposing players by driving them to the hospital when injured if needed.

Throughout the season he was patient and remained flexible as there were schedule issues for the first couple of weeks due to not being on the website prior to the season. Eddie never missed a game.

Taggart Electric was the 2nd team to beat Slime Green (Integrated Chiropractic) this year, doing so in a very close game that went down to the final minutes. A link to the game can be found below 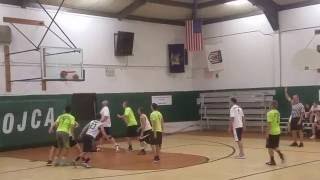