WHAT IF...the summer league teams were Blend-A-Rama teams, Here's what it would look like 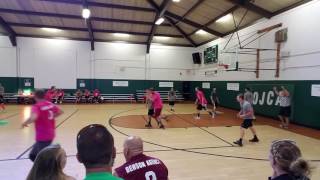 The effects of alcohol can depend on the amount consumed, the environmental context, and on the individual. Daily consumption of up to four drinks may have a protective effect on the cardiovascular system. Nonetheless, people most commonly drink for alcohol's anxiolytic (stress reducing) property. Conversly, alcohol has a wide spectrum of negative effects, from societal to physiological, accounting for approximatley 100,000 deaths yearly in the United States. From a physiological perspective, two situations draw special attention for hte fitness-oriented individual who consumes alcohol. Acutley, alcohol can casue negative effects on motor skills and physical performance. Chronically, alcohol abuse may eventually impede physical performance; individuals diagnosed with alcohol dependence have deisplayed varying degrees of muslce damage and weakness. Futhermore, alcohol abuse is at least as prevelant in the athletic community as it is in the general population; the vast majority of athletes have begun drinking by the end of high school

ALCOHOL AS A NUTRIENT

Each gram of alcohol (ethanol) provides seven kilocalories compared to nine for fat and 4 for each carbohydrate and protein. Other nutrients may be present, depending on the type of beverage. Beer, for example, has been seen as a good source of many nutrients and has sometimes been used in rpeparation for endurance events or to replenish nutrients following competition. Actually, orange juice supplies 4x the potassium plus almost 3x the carbohydrates, and it would take 11 beers, for example, to obtain the B-vitamin recommended daily allowance (RDA).

Strength/Power and Short-term Performances- The effect of alcohol, in low to moderate doses, is equivocal. It can have a deleterious effect on grip strength, jump height, 200-and 400-meter run performance, and can result in faster fatigue during high-intensity exercise. Conversely, alcohol has been shown to lack an effect on strength in various muscle groups, on muscular endurance, and on 100-meter run time.

Aerobic Performance- Low or moderate amounts of alcohol can impair 800- and 1500- meter run times. Because of its diurtetic property, it can also result in dehydration, being especially detrimental in both performance and health during prolonged exercise in hot environments.

Any lingering effect of alcohol would especially hinger physical conditioning progress. According to current research, the effect during a hangover seems to be undecided, with no effect on several performance variables, but a decline in total work output during high-intensity cycling. Furthermore, handgrip muscular endurance has been shown to suffer a delayed decline on the second morning following intoxication.

PERFORMANCE WITH CHRONIC ALCOHOL USE

Chronic alcohol abuse may be detrimental to athletic performance secondarily to manyof the sequelae that can develop. Alcohol affects the body's every system, linking it to several oathologies, including liver cirrhosis, ulcers, heart disease, diabetes, myopathy, bone disorders, and mental disorders. The following implications may especially interest the athletic individual. Alcohol can result in nutritional defieciencies from alterations in nutrient intake, digestion, absorption, metabolism, physiological effects, turnover, and excretion of nutrients. Myopathy (muscle damage, wasting, and weakness) can occur in various muscles, including the heart, oftern compounded by alcohol-cause neuropathies. Also, the hormonal environment can change, making it less conducive to increasing muscle mass and strength.

Athletes should be informed of all of alcohol's detrimental aspects. Team rules and guidelines such as the following can be used:

To address any underlying causes of alcohol abuse, professional counseling should be available to atheletes either directly or by referring athletes to community resources.